Back in 1989 sliding doors had a very bad reputation, mainly justified, based on old fashioned systems of tracks hand-built into walls.
They were often noisy and wobbly, they jumped off the tracks and had sticky sliding actions – sliding doors were really only used when there was no alternative, they were never considered to be a positive design feature.
In 1989 in a factory near Treviso in northern Italy, a company called Eclisse was born, with an idea, a concept and a mission to change all of that… the success was immediate.
The key to this success was an innovative pocket sliding door system completely integrated in design and operation that meant it was strong, easy to fit and eliminated all of the problems of the old systems.
The Eclisse system initiated a complete re-think of the use of sliding doors by designers and architects.
And, if you’ll forgive the pun, the Eclisse system opened up doors for them by making more usable space in any project, maximising floor area with no compromise in design.
In the intervening years this success brought distribution throughout the world with sales in more than 50 countries and made Eclisse the worlds largest manufacturer of these integrated systems.
Here in the UK, Eclisse are expanding rapidly with systems being installed everyday, all over the country.
Not just by forward thinking developers but as a desirable and logical solution to everyday problems with space and light.
Many of the major house builders have used Eclisse systems as have major architects, designers, builders and developers.
You’ll find them everywhere, in luxury hotels, stunning designer houses, practical self builds, commercial offices and affordable housing. Once you’ve used it you’ll wonder why you ever used a hinged door.

Eclisse have developed an elegant, practical alternative to conventional hinged doors – a framework that forms part of the wall and allows your doors to slide effortlessly inside the walls freeing up all the space that the door arc takes out of service.
It is estimated that in an average home, more than 8% extra space can be released by the use of sliding pocket doors; that’s 8 square metres of extra space in a 100 square metre house.
Well worth having!

The Eclisse System can be used in new build, solid or stud walls (metal or wooden), just by including the overall dimension in the wall design.
In existing buildings with stud walls it is a relatively simple job to remove the required amount of the stud wall to incorporate the frame.
With existing solid walls, a section of the wall has to be removed and a lintel installed above, or the frame can be installed alongside the existing wall, effectively creating a new 100mm stud wall. Eclisse spent a long time researching and developing a product which we think is foolproof, it’s so simple to assemble and install.
Assembly of the pocket really does take a matter of minutes, using a series of horizontals that click together easily. And installation is done simply by screwing through the top and end verticals into the wall. Ta da!

Over the past 20 years Eclisse have researched, developed and obtained more than 20 specific patents that give the Eclisse system clear and useful advantages:

These are just a few examples of the patents Eclisse has obtained over the years.
Eclisse was also the first to introduce into the market, innovative developments such as the motorized unit, the self-closing mechanism, and many others.

Quality materials for lasting customer satisfaction:
Eclisse products are designed, developed and produced in accordance to the UNI EN ISO 9001 standard, for which Eclisse is fully approved.
Eclisse has its products tested wherever possible by independent testing laboratories such as the Milan based authority C.S.I. in order to openly demonstrate the quality and reliability.

Durability test in accordance with the European norm UNI EN 1527. After 100,000 opening and closing cycles (equal to 30 years of use) the runners showed no significant traces of wear or damage whatsoever.

The fully extractable track is made from the more expensive aluminium alloy 6600 (UNI 9006:1) and protected by a 10 μm anodic layer with a T5 thermic treatment.

Fill out the form to request information from ECLISSE UK 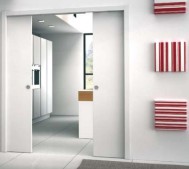 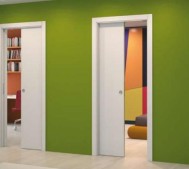