Spread the use of the most noble and antique binder for the building trade: lime.

In the second half of the 1800s, some lime kilns already existed along the banks of the river Brenta that used the limestone, collected from the gravel banks, whose principal characteristic was its whiteness, already mentioned in texts dating back to ‘300 regarding the white from S.Giovanni used in the production of the frescos..
Cristiano De Toni, in 1920, in order to use up the scraps of wood from his sawmill, built a vat kiln and founded “La Calce del Brenta”.
Soon after, the production of lime became the principle activity of the De Toni family.
After the death of its founder, his son Gaetano, together with his brother Michele, continued to produce lime in the traditional manner, with river pebbles softly baked in a wood oven, whilst introducing plants to alleviate the “stoker’s” heavy work.
At the beginning of the 1960s, the lime market, until that time strictly linked to the area surrounding its production, underwent its first expansion, becoming regional, thanks to the packing of slaked lime in sacks and the production of fine packed mortar
In 1976 ,on the traumatic death of Gaetano, his son Franco succeeded him and, together with his wife Mariangela, gave new impulse to the business proposing slaked lime, which had until then been almost exclusively used a filling mortar and wash, as a prestigious finish
Their passion for art and the historical research for materials traditionally used, led to the presentation of lime paint, rasatura and marmorino, the noble finishes of the prestigious Venetian palaces and villas.
In the course of the years, La Calce del Brenta, which had by then become a positive point of reference for designers and appliers, introduced a number of other products specifically studied to offer its clients a complete range and so meet the market demand which had by them become national.
With the entry into the business of the fourth generation, “La Calce del Brenta” proposes to also make the traditional Italian lime finishes famous on wider markets.
The De Toni family’s commitment has always been to spread the use of the most noble and antique binder for the building trade: lime.

Fill out the form to request information from LA CALCE DEL BRENTA S.R.L. 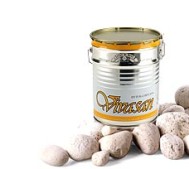 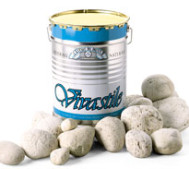