The UK division of the VEKA Group was established in 1986 with the development of a production facility in Burnley, Lancashire.
Word of the company’s sterling reputation spread quickly, and after just a year – an extra 20,000 sq ft of space was added to the factory to accommodate the growth of the business.
Over the years, VEKA plc has continued to expand and has invested heavily in order to develop one of the most impressive manufacturing and distribution plants in Europe.
VEKA is best known for design innovations in PVC-U window systems, we have built up one of the most technically advanced, and aesthetically pleasing product portfolios available in the industry today.
To complement these product developments, VEKA has now completed an infrastructure investment totalling almost £10 million. VEKA plc continues to invest significantly in the technology, plant, new products, IT and skills to equip its customers to meet any challenges the future may hold.
VEKA’s window system was the first in the UK to be awarded the prestigious ‘A’ Rating under the new energy ratings system. This means that it offers superior heat retention – saves you money on your heating bills and helps save the planet.
It’s all in a day’s work…

VEKA was Founded in Germany in 1967 as VekaPlast.1986: It expanded enough to build a production unit in the UK – in Burnley, Lancashire.

Fill out the form to request information from VEKA Windows UK 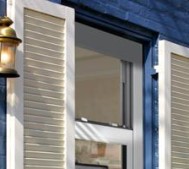