The modules are available in 4 standard versions

The range has been designed to make the most of the available space on the roof and make the design stage easier.

The unit of measurement is kilowatt-peak (kWp), used as a standard unit in the world of photovoltaic panels.
General SOLAR PV needs approximately 17 sq m of surface to install 1 kWp on a roof.
However, these are 17 effective sq m, i.e. they don’t take up more space than declared.
A traditional system with a rigid glass panel and framework needs less photovoltaic square meters to obtain 1 kWp, but each row of panels, positioned on supports, needs to be placed at an adequate distance from the preceding and following row to prevent the panels from shading themselves and become less effective.
Ultimately the two types of modules occupy more or less the same amount of space on the roof, but General SOLAR PV has a considerably lower impact when compared to traditional systems. 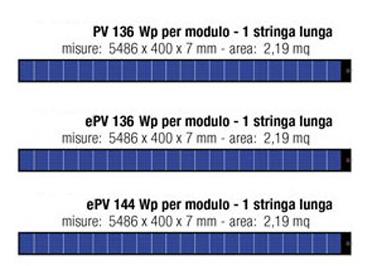 All of the General SOLAR PV versions are certified in accordance with the IEC EN 61646 and IEC EN 61730 standards, which are mandatory for the “Conto Energia” feed-in scheme. General SOLAR PV received both the TUV InterCert and the Eurotest Certification.

Fill out the form to request information from GENERAL MEMBRANE SPA

Other Products by GENERAL SOLAR PV 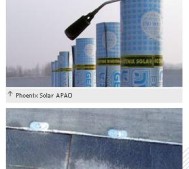 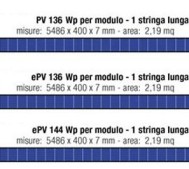